The buzz of becoming homeowners.

Previous Next
Wasp nest the size of six rugby balls

The buzz of becoming homeowners took on a whole new meaning for a Tauranga couple when they found a huge wasp nest the size of six rugby balls under the lounge floor.

Michael Melville-Barton got a huge surprise after crawling under the Otumoetai property to replace a faulty TV aerial cable and spotting the giant nest attached to the floorboards.

Before quickly backtracking, he snapped a cell phone shot to show his wife Gemma the intricate nest with a “rainbow like pattern” that was embedded in a layer of insulation above his head. “When I saw the picture it gave me a bit of a fright,” she said.

They guessed it might be a wasp nest after comparing the photo to similar images on Google. But it was the enormous size of the insect nest that unsettled the couple, who have two young children.

“I didn’t know actually what it was – but I knew it wasn’t good. I saw some dead wasps on the floor below the nest,” said Mr Melville-Barton.

“The day before we were sitting on the deck and my mate had a wasp go past his face so I thought it could still be active.”

Although there was no sign of wasps around the nest and it appeared inactive, the couple, whose children are aged 1 and 3, decided to call in experts to have it removed.

“There were a few dead wasps around the place but then a friend of ours saw a couple of live wasps when he was here,” added Mrs Melville-Barton.

“With young children you just don’t want to take any chances with this sort of thing.”

PestNZ service technician Mike Wills said the nest had once contained German wasps. In 20 years dealing with pests he had never seen such a large wasp nest in a building.

“When active this nest would have contained thousands and thousands of wasps,” he added.

German wasps have a potent sting and can attack in large numbers if disturbed or threatened, he said.

“Anyone who was under the house would have potentially been in serious danger had this not been a dormant nest. It doesn’t really bear thinking about. It was a confined space and there would be nowhere to escape in a hurry.”

The couple, who recently relocated from Auckland, took possession of the 1960s property just a month ago. “There was nothing that led us to believe there was anything like this under the house,” added Mrs Melville-Barton.

German wasps fact file:
New Zealand has some of the world’s highest densities of German and common wasps.
They have no natural predators here: our winters are mild and there is plenty of food for them.
The venom from a wasp sting contains several toxins that can cause a hypersensitive or allergic reaction in some people.
German wasp nests are grey. The world’s largest recorded wasp nest was discovered at Waimauku (near Auckland). It was 3.75m tall and 1.7m wide.
Source: Department of Conservation 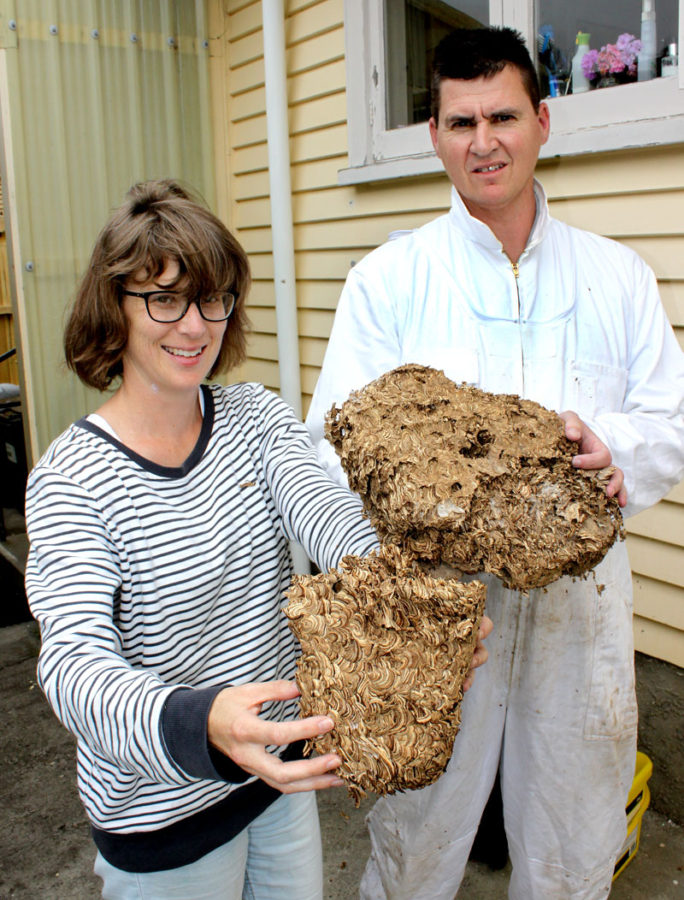