Hot and dry weather has seen a surge in reports of a nasty summer pest whose sting can trigger a severe allergic reaction in some people.

Conditions are proving ideal for German wasps – and the aerial invader should be treated with extreme caution, warns PestNZ Service Technician Mike Willis.

With summer in full swing, reports of wasp activity have come in from across Auckland, throughout the Waikato and in Tauranga and the wider Bay of Plenty.

Mike has commended the prompt actions of staff at a Tauranga child care centre for calling in the experts after German wasps were spotted on the property.

“The nest was in the early stages and had they left it, it would have developed into a very large nest,” said Mike.

“It was located in a bank on a driveway and the wasps were seen coming and going from a hole.

“It contained several hundred wasps but these things can grow quite large if left untreated. It would have likely grown to a nest containing several thousand wasps and become a real problem.”

German wasps are New Zealand’s most aggressive wasp species. A single sting from a German wasp sends a signal for others to attack. A wasp’s venom is capable of triggering a serious allergic reaction known as anaphylaxis.

Mike said German wasps were aggressive by nature and on several occasions he had come under sustained attack while dealing with a nest.

“They are pretty determined and I’ve been bombarded by them on several occasions.

“Fortunately I was wearing protective clothing – but it didn’t stop them trying to sting me.”

He said if someone came under attack from German wasps it was best to remain still.

“The more you move around the more they will come for you. They are so aggressive when they are angry.”

He is predicting that it will be a particularly bad summer for wasp numbers.

Early intervention is the key to avoiding a big problem, he said.

“People should check around their business premises and their homes if they spot any wasp activity.”

Mike said the largest wasp nest he’d encountered was in a building at Auckland University. It was nearly twice the size of a basketball. “It was quite an amazing thing to see.”

What do they do and how did they arrive in New Zealand?

The widespread German wasps live in large colonies, about the size of a soccer ball but can become huge if they manage to survive over winter.

The German wasp was introduced to New Zealand with United States aircraft parts in the 1940s and is now widespread.

This wasp is similar in appearance to the common wasp, and both have the characteristic black and yellow colouration but the German wasp has black dots along its body.

German wasp nests are grey. Wasps feed on meat, many other insects, sweet foods and competes with native birds for nectar, fruit and honey dew.

The world’s largest recorded wasp nest was discovered at Waimauku (near Auckland). It was 3.75m tall and 1.7m wide.

April 2015: A Hastings woman on holiday in the Marlborough Sounds felt something sting her foot. She headed to the sea to stand in the cold water – but by the time she got to the beach she was semi-conscious. Her tongue was swelling and she had a ringing noise in her head. She was treated for anaphylaxis and airlifted to Blenheim where she recovered in hospital.
February 2014: Nine children and a grandmother were hospitalised after a wasp attack during a school trip to a beach in Nelson. The pupils were taking part in game when one of them disturbed a wasp nest.

February 2012: Morris Stretch died after being stung by thousands of wasps in the Marlborough Sounds. He was collecting firewood with a family member when they accidentally disturbed a wasp nest. He died before emergency services arrived. 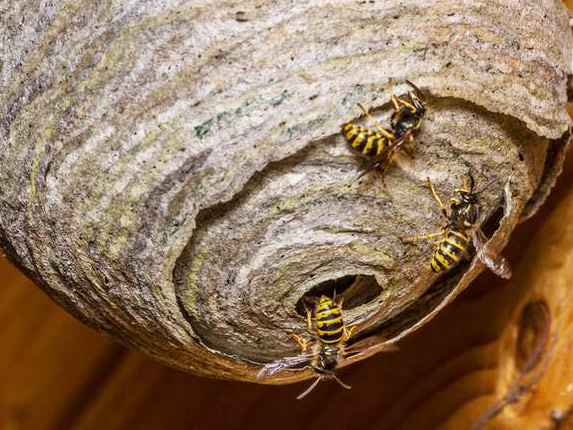